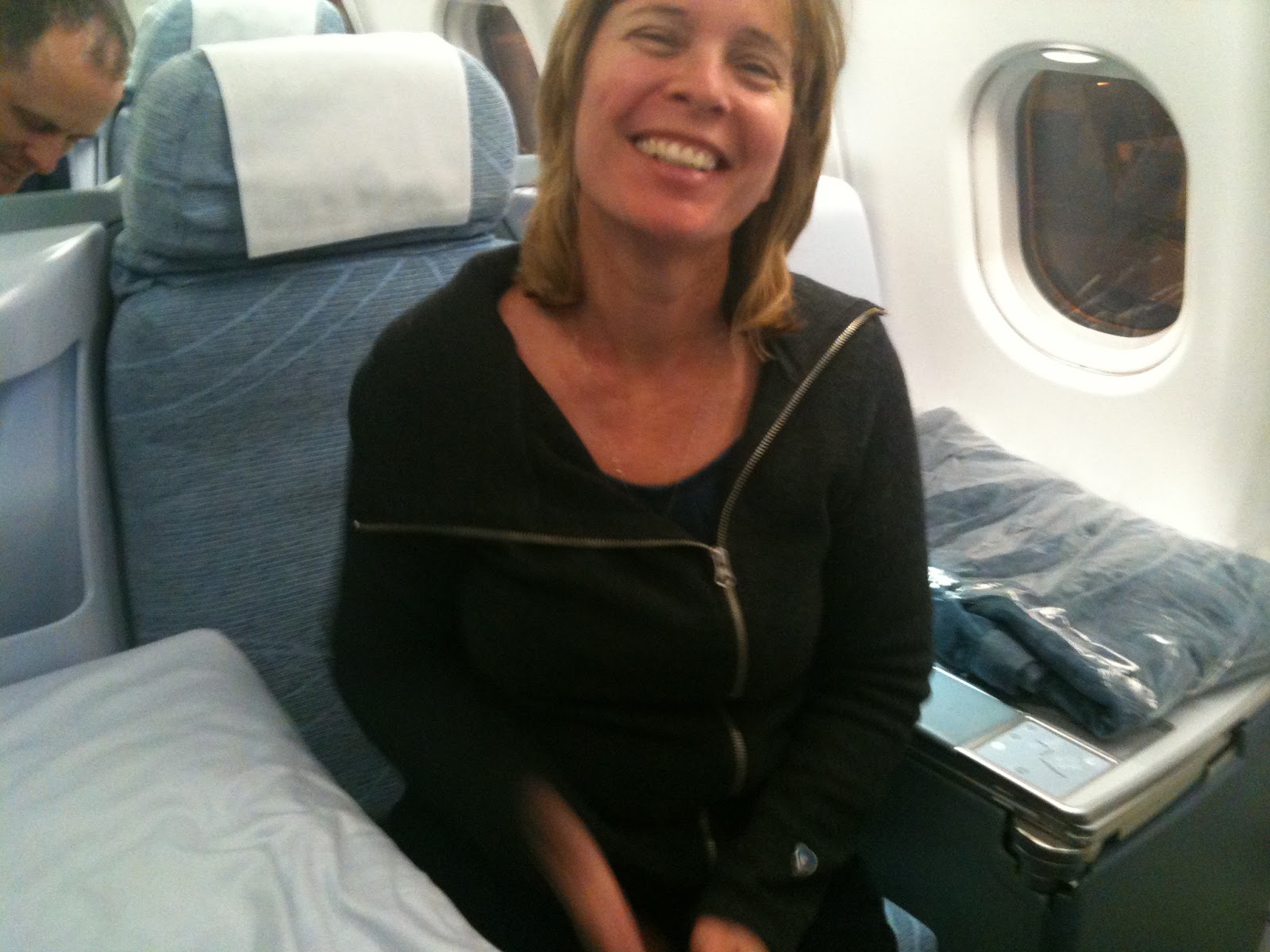 In a state of delirium due to fatigue, a cold, and the inability to sleep for the last three nights, I finally threw everything in the suitcase at 9:00 the night before departure and went to bed.  The prep work of getting my students and classrooms ready, my house, my dog and their caregivers ready, and myself ready to move to another country for six months had me living from to-do lists for months. I had nothing left; I only hoped that the planning of the last three months would make up for my inability to form a complete thought at this moment.  At 3:30 I awoke without an alarm, vacuumed the upstairs (See?  Not thinking.) and prepared to leave.  Dennis showed up at 4:30 AM and we left to pick up my mom on the way to LAX.  By this time I had relinquished all thinking to them.

I had two very LARGE suitcases and when we weighed the heavier one at home it read 46 pounds – a relief because the limit is 50 pounds. So why did this same suitcase weigh 72 pounds at the LA airport?  Were the wheels on the ground when we put the suitcase on the scale at home or were we now on planet Jupiter, as Dennis quipped, where there is significantly more gravity? Or perhaps my suitcase became hydrated when I opened it at LAX?  – because of the moisture in the air, you know – water weighs a lot.  My mother warned me against packing too many liquids – that they weigh a lot – and I took her advice – but I didn’t tell her about the four tripods and metal steady cam I also had to pack. Metal weighs a lot, too. (They told me it would cost 200 American dollars to ship my suitcase but somehow they took mercy on me and only charged me 50 American dollars. (Surprise!  There isn't an American dollar sign on the Finnish keyboard. :)

The flight went from Los Angeles - New York City (JFK) – Helsinki and then a turbo prop to Joensuu, Finland.  At JFK I had the pleasure to meet Lucca.  (See Lucca's story here.) 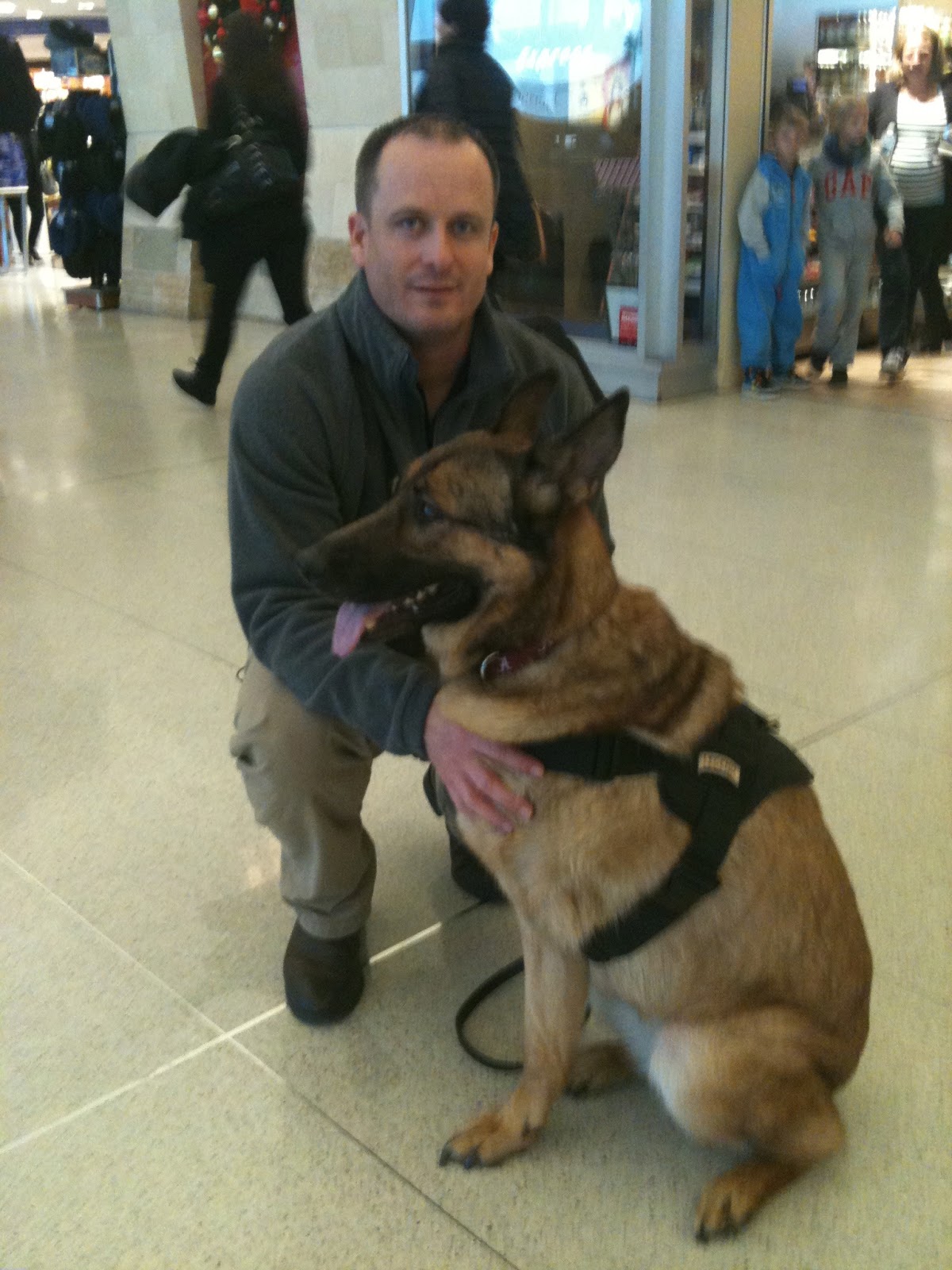 I asked Chris, Lucca’s handler, if he had seen the BBC videos of dogs that had been trained to drive a car.  He said he had.  When I asked him if he was surprised to see that dogs could drive he said, “Not at all; they’re very smart.”

I called AT&T to shut down (but hold) my phone number for six months and my phone line went dead.  The separation from the U.S. was beginning....

I was “over the moon” excited to learn I had been placed in business class from New York to Helsinki – which means I got a seat that reclined to a bed!  I said to the stewardess, “Are you sure?  How did I get this?”

She smiled, as did a man sitting in business class across the plane; we knew the difference between seats where you had to sleep in a sitting position for 7 hours and the luxuries of this section.  I was elated…then melted into the airplane bed after take off and fell promptly to sleep without dinner.

After a good sleep in my massaging bed-seat I woke up to fresh coffee, orange juice, and a ham and cheese roll. I found my reading glasses, which had slipped behind the console, and listened to some new music on the audio system called “Delay Trees.” I decided to take a chance to find some new music on the flight and it paid off.  I will purchase this album in the future.

We’re now flying over Norway, one hour and ten minutes from Helsinki in the direction of 103 degrees east. I think this is the same direction that Dennis and I calculated the sun to be rising in Laguna Beach when we took the time lapse pictures last Sunday – a funny coincidence. 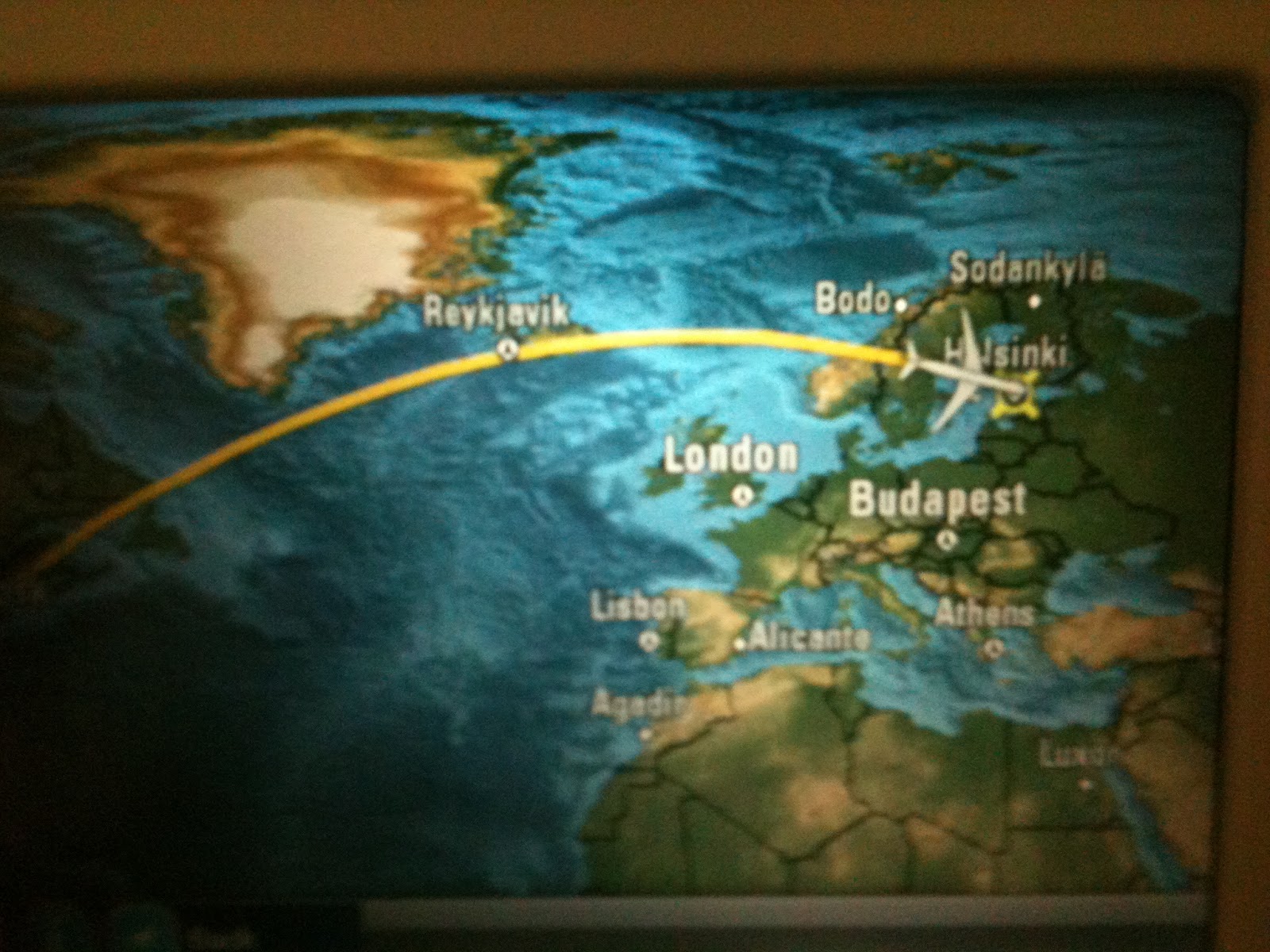 There’s a “new” airplane graphic in air travel that shows the jet in motion with the earth, in its daylight and darkness in the background, with the earth spinning in relationship to the sun. I see the relative darkness of the northern latitudes, and how Finland looks to be in a sort of twilight.

I didn’t get a picture of the graphic but about 120 miles west of Helsinki I saw this out the window: 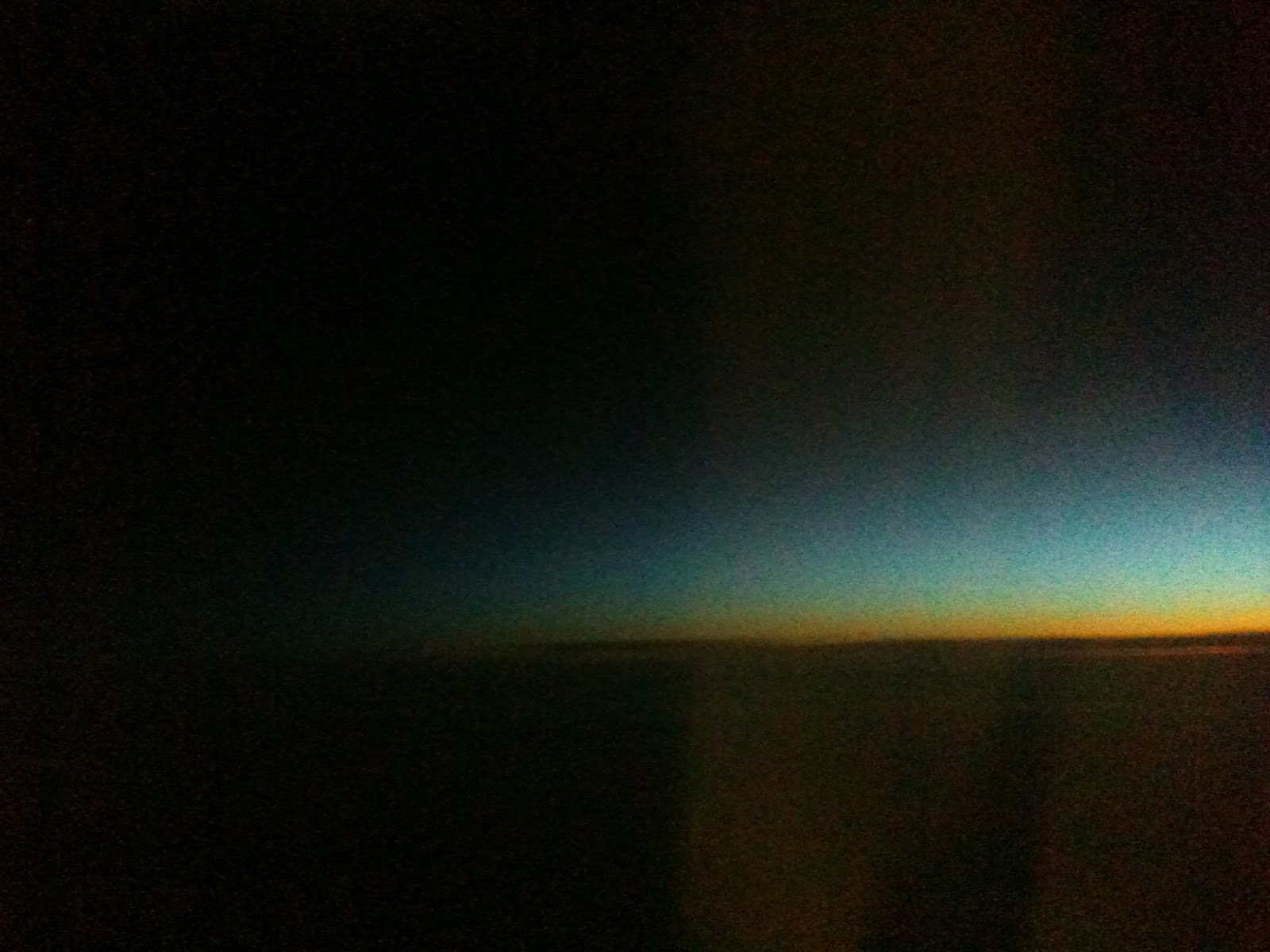 Early dawn was breaking over Helsinki. There were no clouds above the dawn, just open sky – but this early light was captivating in the northern hemisphere.

I was met at the airport by my Kari Sormunen, my mentor from the University of Eastern Finland, who took me to my new apartment and helped me learn the practical things of Finland - like how to heat my apartment, how to shop in the grocery store, where to find the bus, etc. – all the things that will make my life manageable during my time in Finland.  He is a lifesaver. 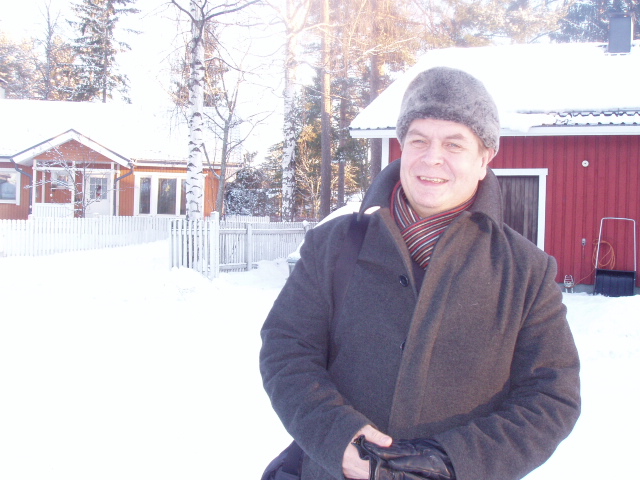 My apartment in Joensuu is quite lovely in the snow.  I live across the street from a large lake and a cross-country ski trail. (Pictures to follow.)

Video: First Video of Finland
I took a walk out to the lake before going to sleep on my first night in Joensuu; I was richly rewarded with the most beautiful twilight I’ve ever seen. 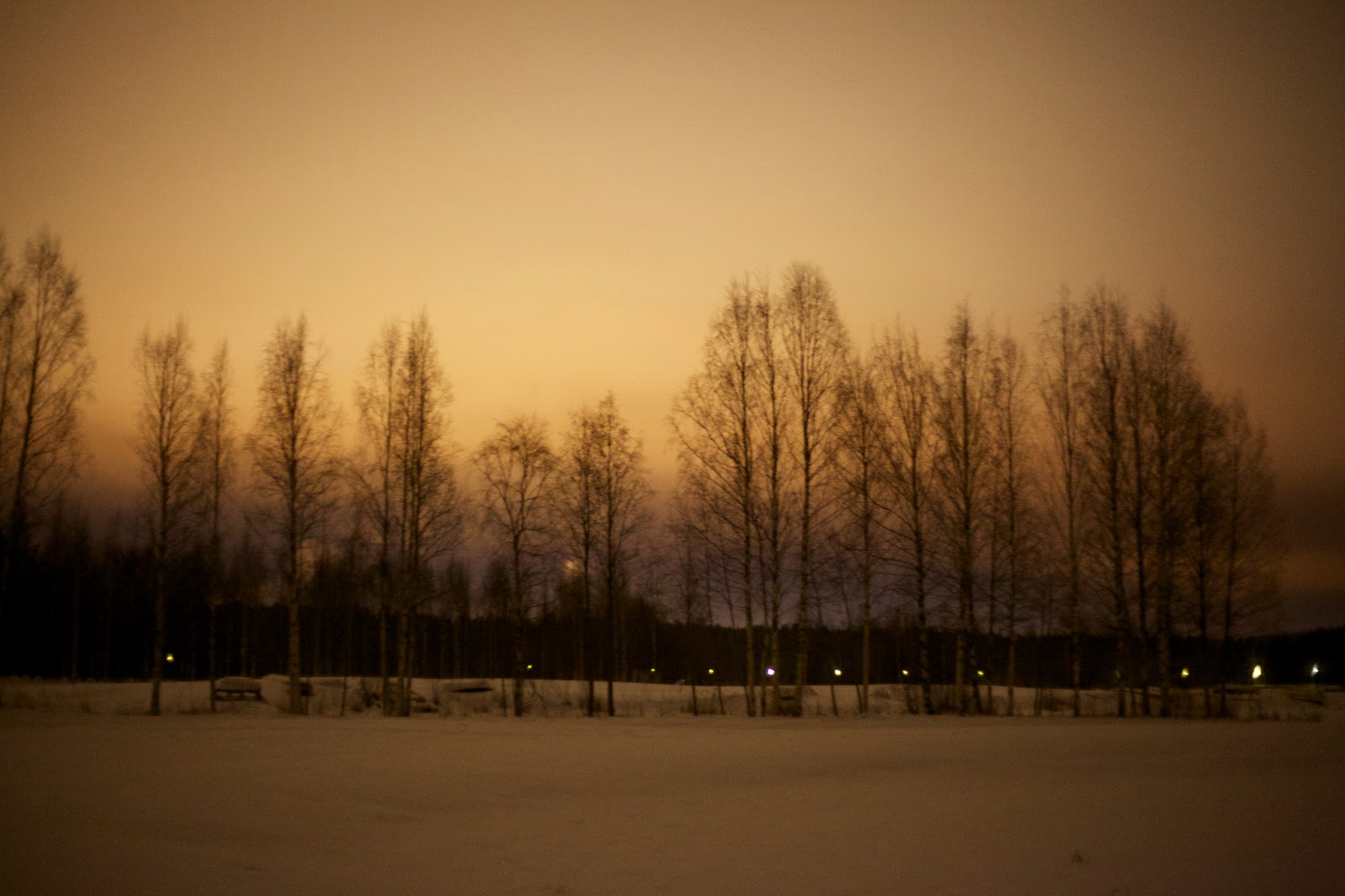 (I found out later this probably wasn’t twilight, that it might have been caused by the lights of the city center, which now, since I know where the sun rises and sets, it was.)

Then I slept but not for long; jet lag crept in.  So I took some pictures in my cute little apartment. 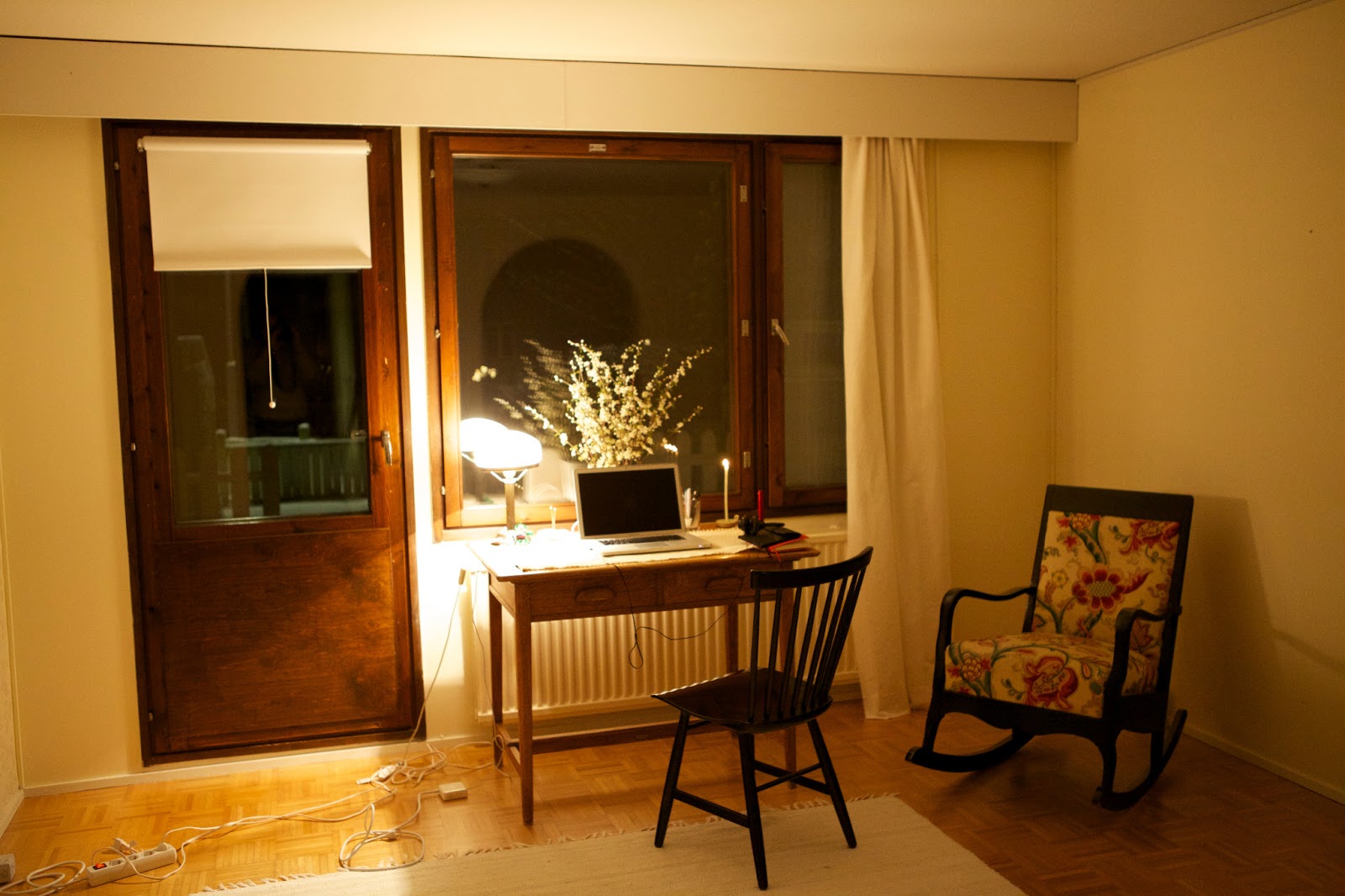 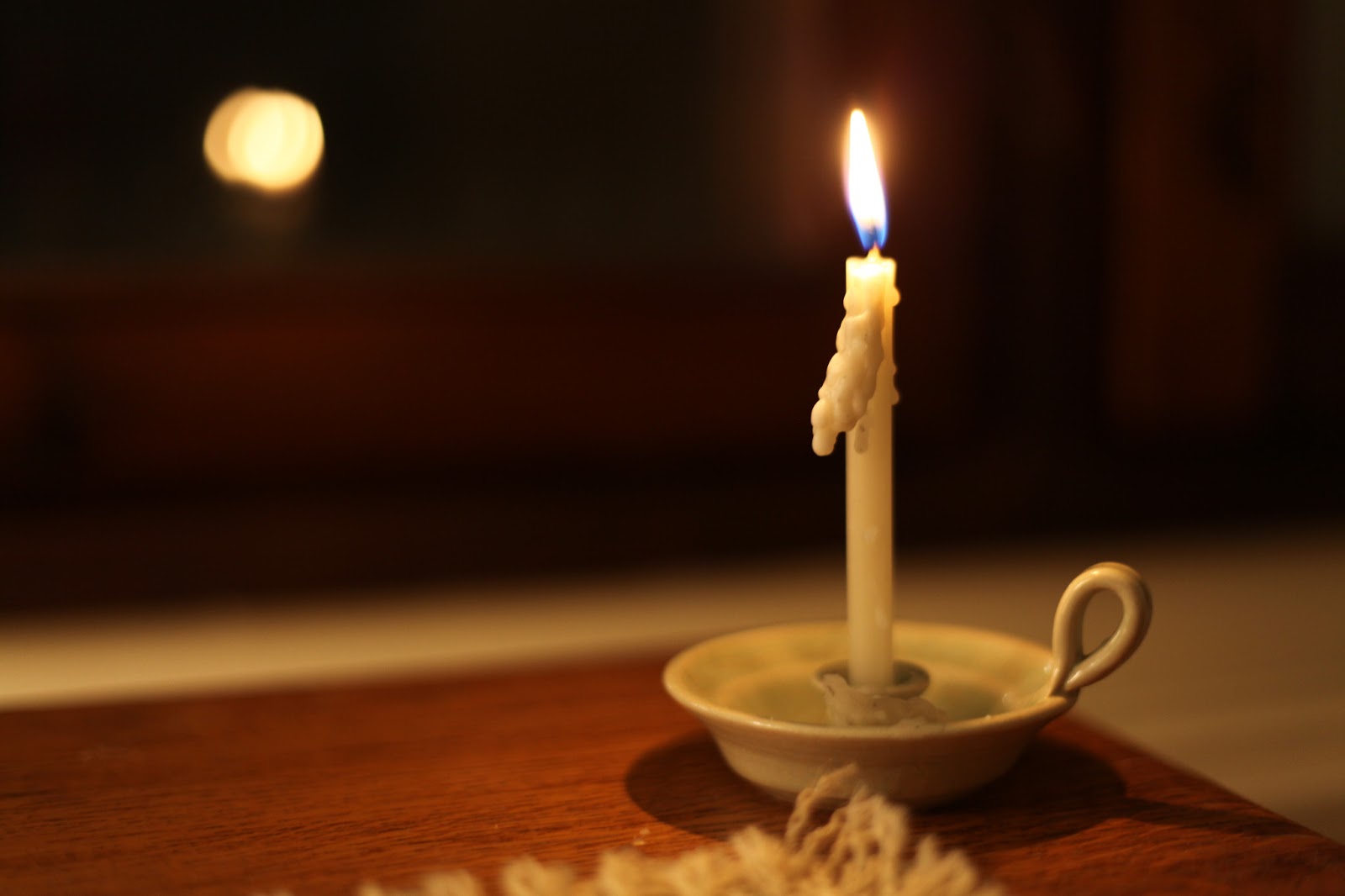 Posted by Janet English at 3:24 AM