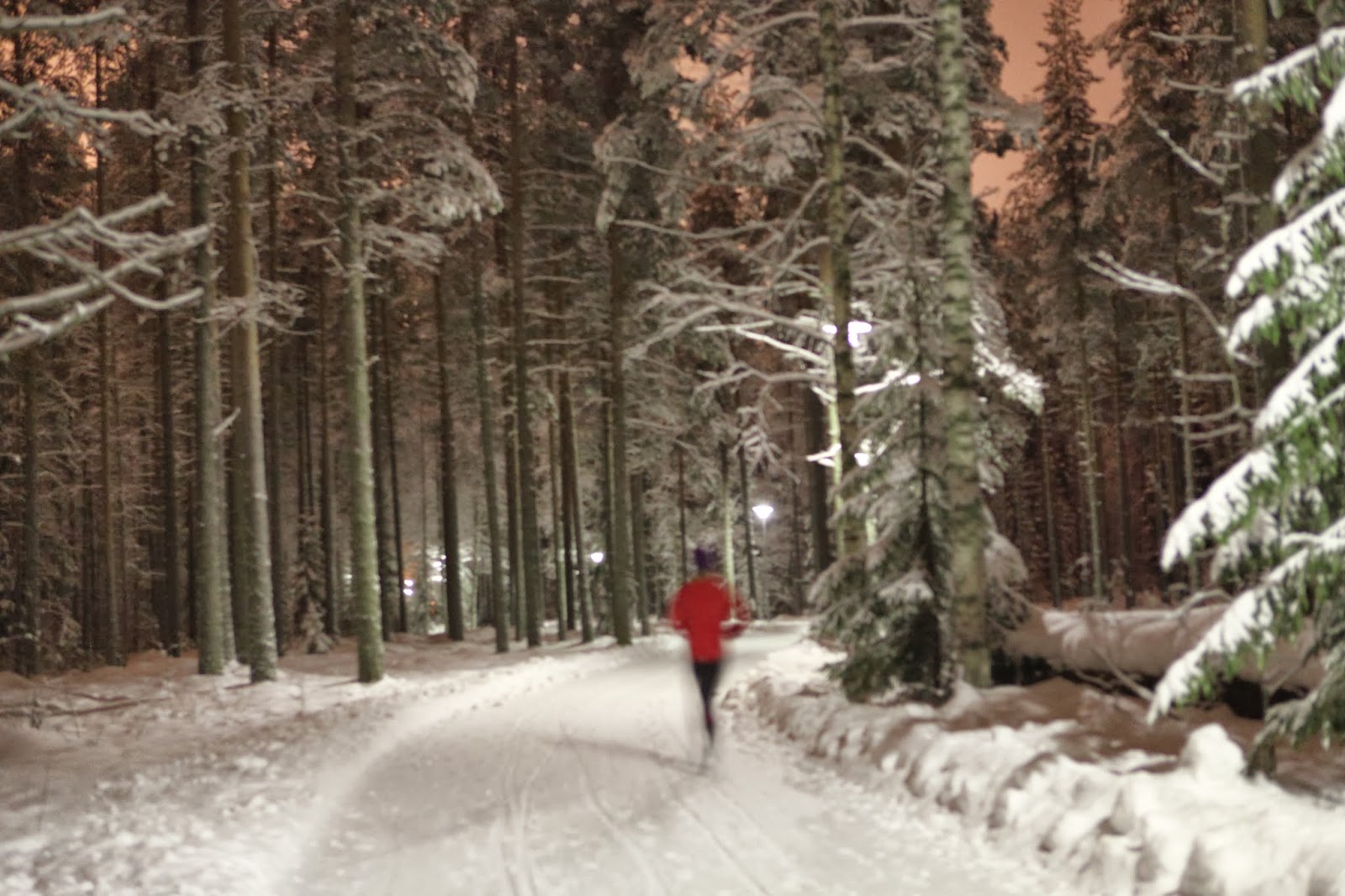 (Most of these pictures were taken at 5:30 the next morning.)

Yesterday morning I walked to school with my new friend Tuula Keinonen from the Department of Education at the University of Eastern Finland. She and her family live up the street in Aavaranta and the walk would give us a chance to get acquainted; I appreciated my time with her. The walking road goes predominantly east/west, just north of Lake Pyhaselka, and proceeds from somewhere west of us,  through our neighborhood in Aavaranta, and toward the Joensuu town center.  Our walk would be about 2.5 km long.

Tuula arrived at 9:20 AM…and when I opened the door she was enthusiastically sweeping the new snow from my doorstep. Thank you, Tuula!

It had been snowing the night before so there was perhaps 4 cm of new snow on the ground and the snowplows were out cleaning the streets and walkways.  She directed me down roads and paths that were less impacted by the new snow. The snow seemed light and dry but she told me this wasn’t so, that it could be drier, still, because today it was clumping on the top of our boots as we walked. It was still snowing as we walked and talked, the temperature - comfortable, and there was a slight breeze. 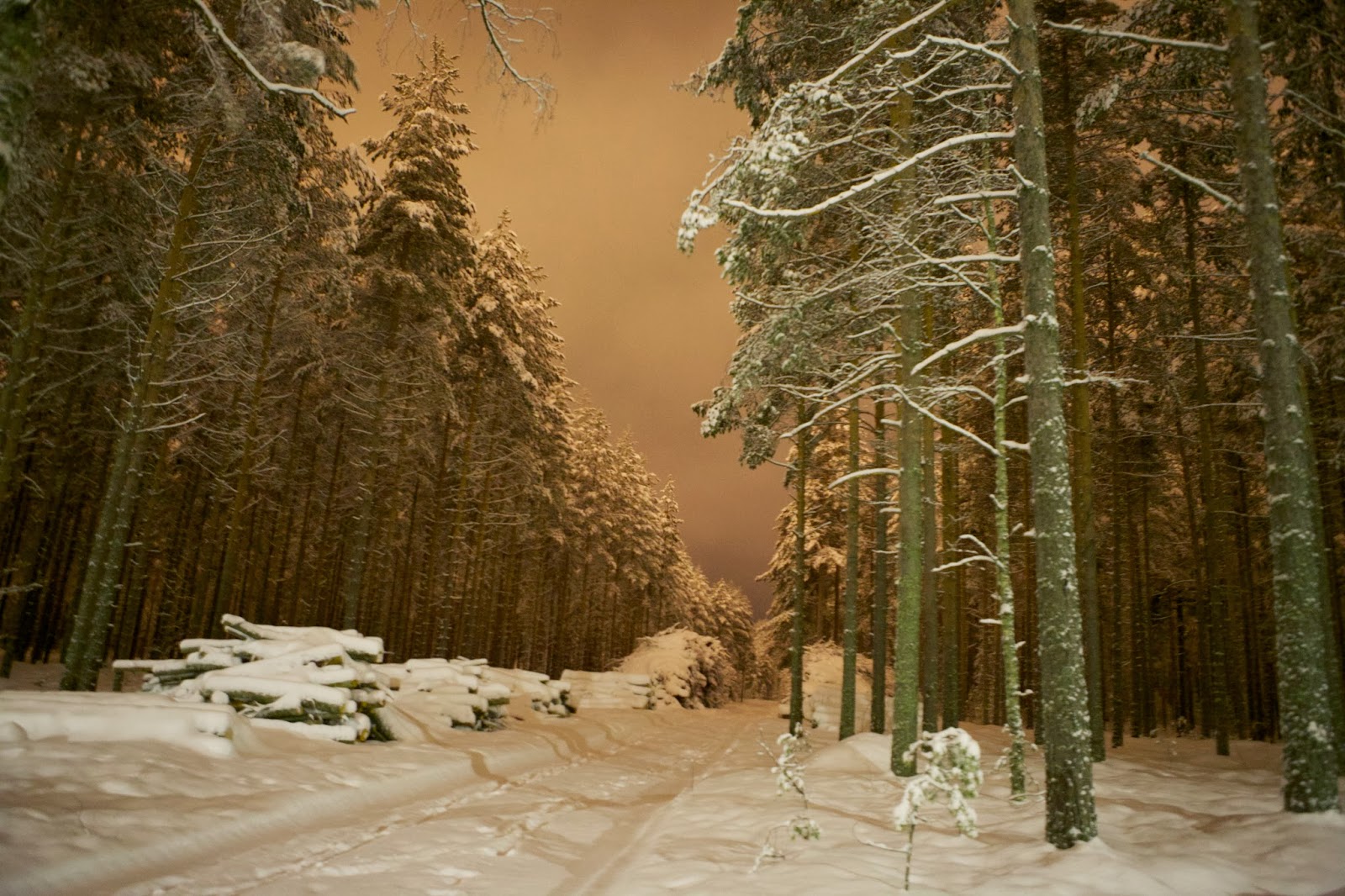 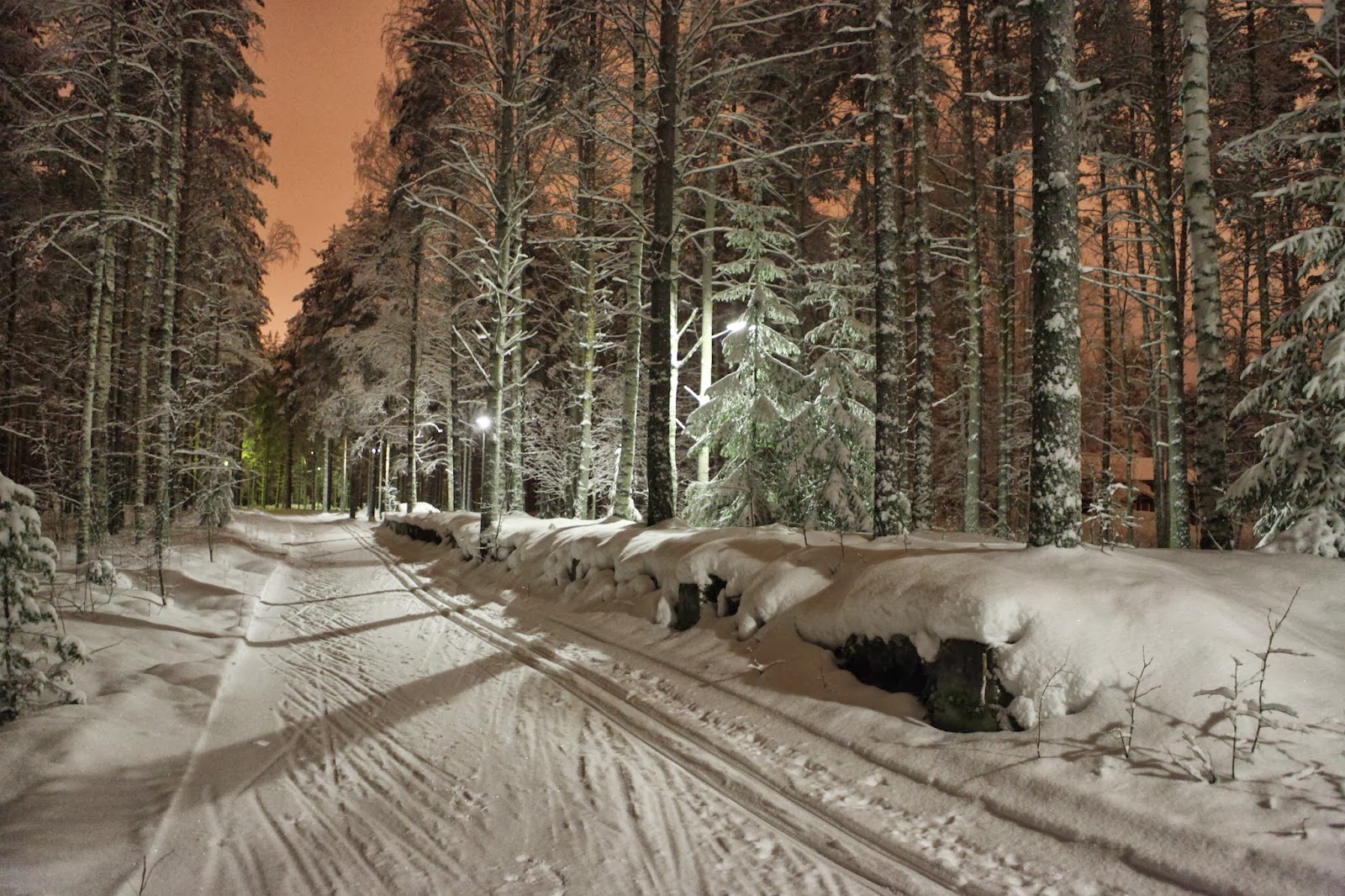 We walked through relatively dense but expansively vertical forest. It winds lazily through largely coniferous trees and runs parallel to a cross-country ski trail.

Along this path in the forest we passed many other people, but sporadically so. Since I arrived in Finland I’ve observed that when Finns move pass each other while walking or riding a bike there is very little interaction.  There may be a quick meeting of the eyes, but facial expressions rarely change and they are surprised if a person (like me) makes an attempt at an interaction – even a nod of the head is greeted with a slight but not uncomfortable look of surprise. At first this felt odd, but then I relaxed into it, and what I have found is that it allows me to stay within my own thoughts, here in the dark and cold winter, and enjoy the process of moving from one place to another – simply moving, changing location - without the interruption of time or thought or another person’s movement relative to mine.

When Tuula and I were about half way through our walk we came upon a stone wall about one meter high and 60-80 meters long that ran between and parallel to the walking road and cross country ski trail; it's left over from an old firing range. 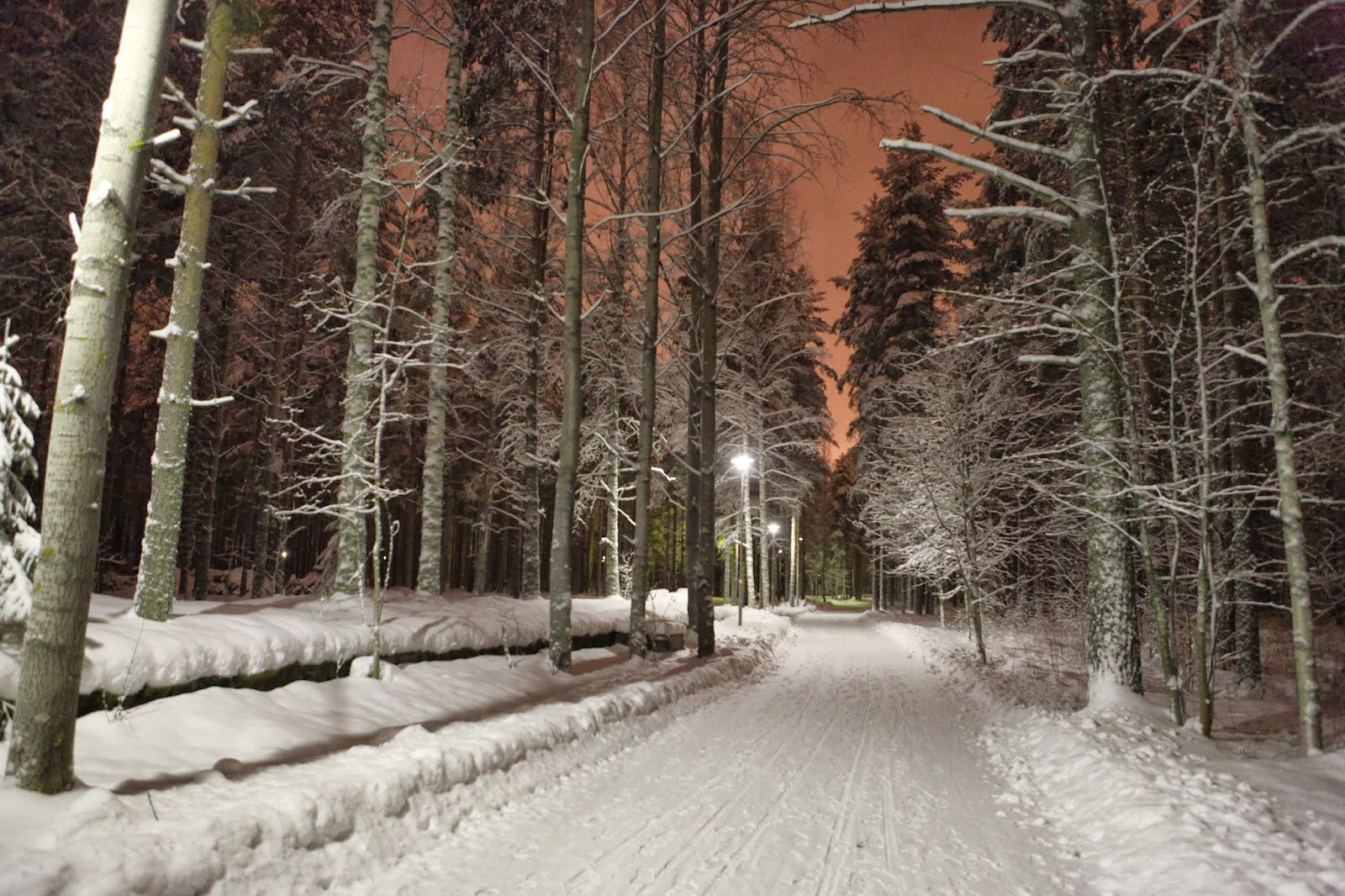 She directed me to look at another area at the opposite side of the road - a memorial to the soldiers who had died during the Finnish Civil War in1918.  From what I could see of it, the memorial is comprised of some very large, monolithic rocks standing on end with a horizontal rock across the top and covered with caps of snow undisturbed. 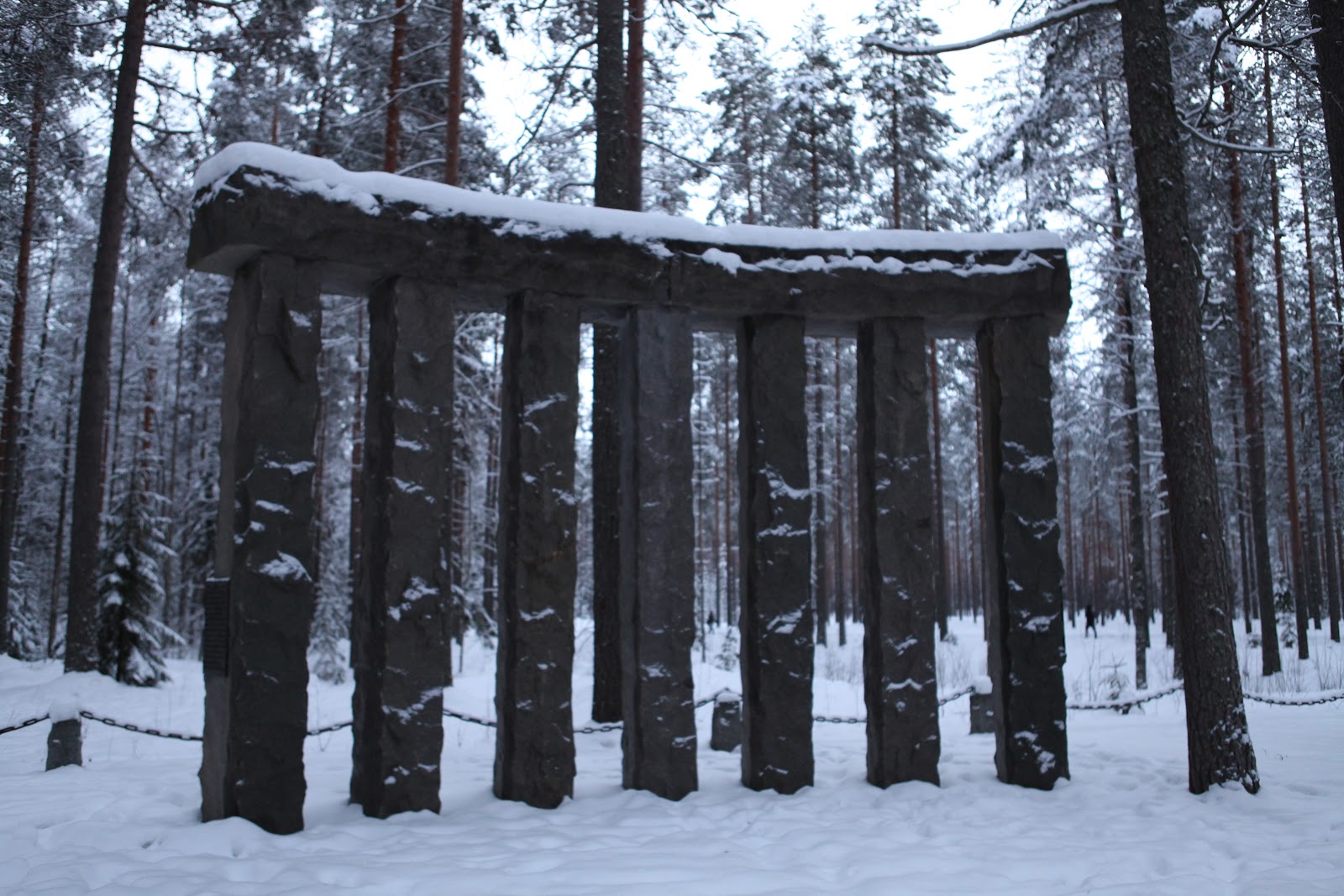 It reminded me of my first day in Finland when Kari Sormunen told me that people in Joensuu are known for their ability to laugh and cry at the same time, that perhaps it's due to Finland’s physical location between Sweden and Russia and the fact that they’ve suffered through difficult times for hundreds of years.  Joensuu is perhaps 45 miles/72 km from the border with Russia, and Joensuu’s identity and existence have depended upon their ability to sustain themselves between these two powers.

Tonight I returned on this same path, walking home by myself; the early daylight replaced by darkness and a light snowfall; the lights along the trail lit. I walked alone, but was not alone, as there were people moving amongst the scenery and pathways; I was becoming part of the silent, moving, Joensuun “fabric,” as if we were all part of the same unchoreographed dance, whether it be walkers or skiers or bicyclists making their way through the snow.  The woods were busy with movement, all of us dancing alone, but somehow in synch with the area’s geography.  It was mesmerizing.

A few days ago I struggled with the feel of this area, and even though it was invitingly beautiful, there seemed to be something missing.

Now I know differently: it was I who was missing.

Posted by Janet English at 6:11 AM