Those Strong (and Friendly) Finns! 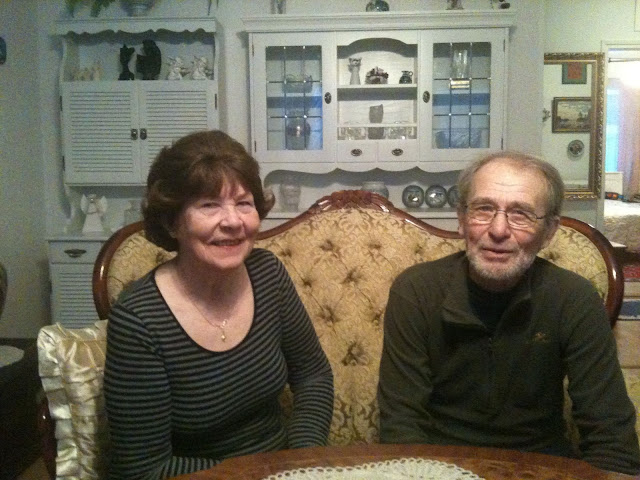 When I woke up this morning I didn't know this couple existed; that would change dramatically within the next few hours.

I woke up later than normal, which is not a good sign for me.  I normally wake up at 5:00 or 5:30  just because I'm rested and ready to start the day.  Today I woke up much, much later.  I knew I wasn't sick;  I was getting too relaxed on this Sunday morning; I slept in because I had nothing concrete planned for the morning and honestly, this woman from California is still getting used to the dark hours of the Finnish winter!  It's very relaxing here!  I got myself motivated and ready for the day; I was determined to go cross-country skiing and I wanted to go further than I had gone yesterday, and the day before - and I wanted to start skiing while it was still light. 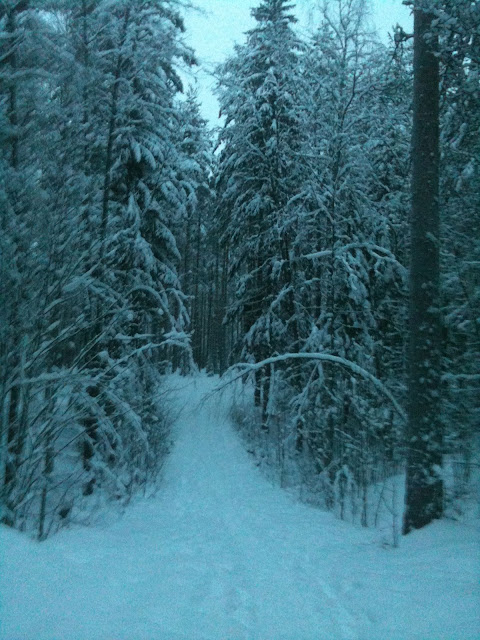 I started in Aavaranta, along Tuula's normal walking route, but I wanted to take one of the cross-country loops she had told me about.  I knew where the cross-country loops crossed/paralleled our walking road but I didn't know where they ended, I didn't remember how long the loops were, and I'm still learning to read the Finnish signs!  Yet how badly can one get lost?  Seriously!  Look at the map!  If you lose your way you either end up at the the lake, or the main road, or in downtown Joensuu.  There is no great risk! 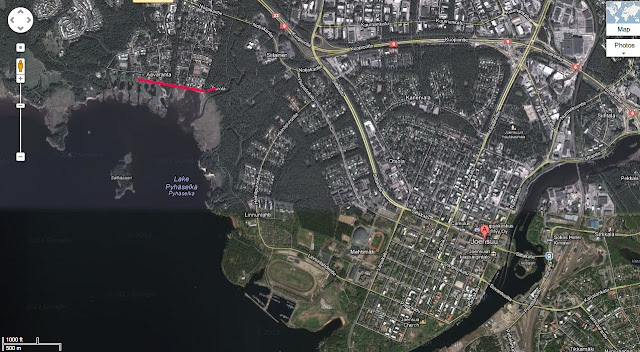 I skied into the woods; at a road crossing a group of six or seven people skied past me and down another trail in the forest.  I followed them! They obviously knew where they were going!  and they were people!  It was Sunday and I hadn't been with people since Friday! 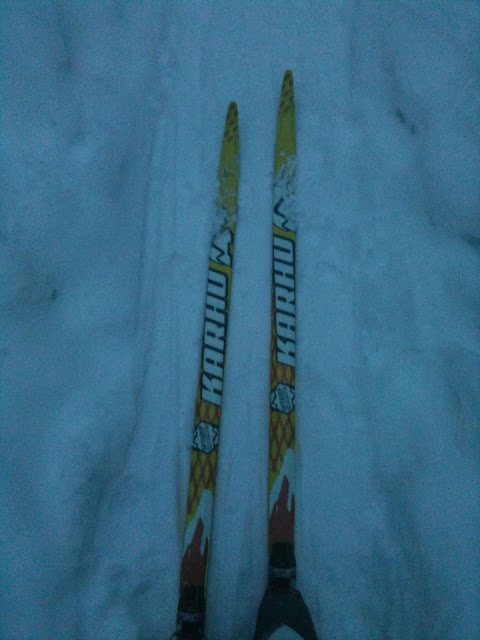 They were fast!  There was no way I could keep up with them - and I now I have my own personal reason for calling them "The Strong Finns!"  The Finns are incredibly STRONG in their cross-country skiing skills!  I was passed by every age, every weight, every height person there was in the forest.  They passed me with no effort, no heavy breathing, and I just kept sliding along...and tried to stay out of their way! 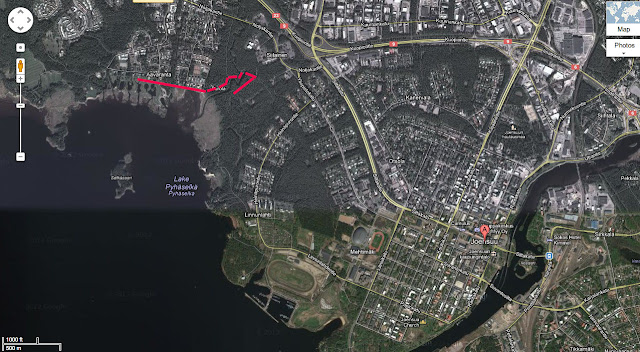 Soon those skiers were off in the distance and around a corner and I continued in the traditional way of cross-country skiing, in the tracks, sliding happily through the woods. 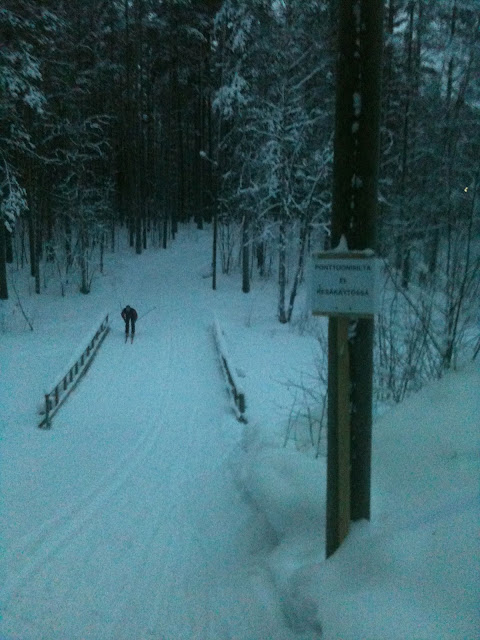 In the forest there are trails that lead off to the left and right at almost every turn in the trail.  Some trails have ski tracks but mostly they do not.  These forest people know where they want to walk and they make their trail through the forest.  (Only some of these trails have I taken the time to walk down.) 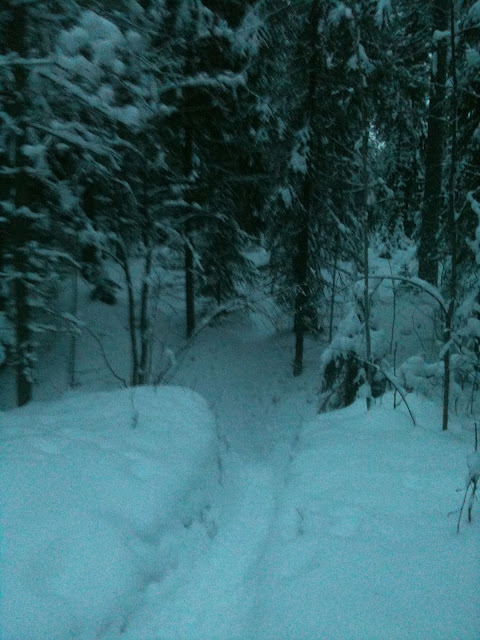 But now I was getting lost, well, as lost as one can be in this little paradise.  So I thought I would ask a Finn for directions, knowing that I may be breaking one of the Finnish rules about talking with people you don't know in the forest.  I thought I 'd better find out where I was going - and a practical request was usually met with kindness from the Finns.

A couple was approaching on their skis and I tried to say as politely as I could, "Anteeksi. Mikä tapa on Aavaranta?" ("Excuse me.  Which way is Aavaranta?")  I pointed in one direction and they said, "No," and pointed in  the opposite direction.

The cloud cover was so dense it was impossible to see the direction of the sun - and during the Finnish winter the sun is always in the south so it's easy to navigate; I had gotten turned around with the twists and turns in the forest. 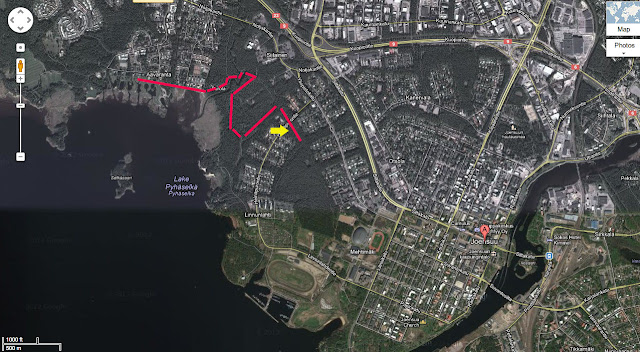 From here we started a conversation that was a mixture of Finnish, English, German and a few words of French; we laughed and we became friends.  Before long, they invited me back to their house for coffee. What a treat!  I agreed.

I told them my name and they introduced themselves as Saima and Kalevi Haapala.  They also live in Joensuu, but more easterly of me, at least when they aren't living in the tundra of Lapland during the summer.

Saima stayed with me as we skied and Kelavi skied quickly on and left us behind.  He was going as fast as a twenty year old!  (Another Strong Finn!) Saima could have gone much faster but she kindly stayed with me so we could arrive at their house together. (I later found out I am the same age as one of their daughters.  Saima is another Strong Finn! I think this very strong couple is in their 70's.) 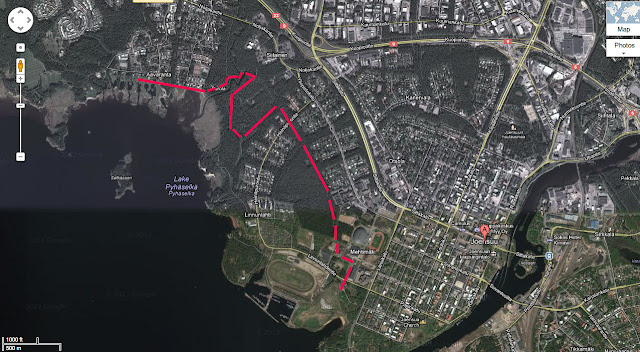 They welcomed me into their home and showed me their family pictures, as well as the pictures from their log cabin and sauna near the northern boundary of Norway.  They even showed me a picture of a salmon they caught that was almost 11 kilograms! The Haapala's were lovely, and kind, and we laughed a lot together.

Saima went into the kitchen and made us coffee, prepared on a table with homemade traditional Karelian foods, baked goods, sweets, and dill (spiced) pickles.  All of the foods were homemade; they were so delicious.  I told Kalevi he was a lucky man (for having a wife like Saima).  He agreed.  He called me the "the girl who always is laughing."  His wife laughed, too.

We spent a few hours together and it was lovely.  They were filled with joy and I appreciated their kindness, of welcoming me into their home, and for offering me their friendship.

I excused myself before it got too dark; I knew I'd have to follow my memorized landmarks to find my way home.  (By the way, I made my way home without even one wrong turn on the forest trail!) 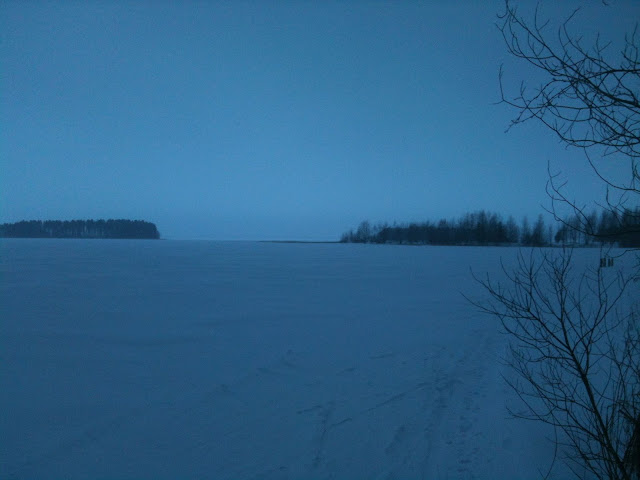 I stopped at Tuula's house, met her daughter and grandchildren, said "Hei!" to Leo, her husband, and stayed for just a little while.  They offered to let me stay for some food but their family was together and I felt they needed their "family peace," or time together, as a family.

What a lovely day.  Thank you, Saima and Kalevi.  Thank you, Tuula and Leo.  Thank you, Fulbright, for allowing us as people, and cultures, to learn about each other and spend time together.