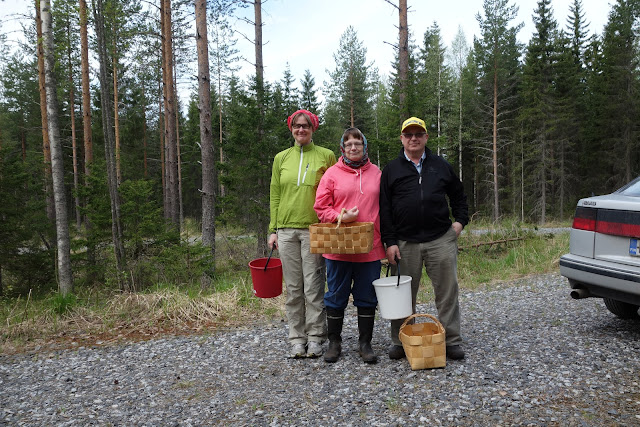 Christine, Tuula, Leo and I went mushroom hunting today.  It was not just any mushroom hunt, but a hunt for the special, poisonous "ear mushroom," or translated into Finnish, the korvasieni.

This mushroom is quite tasty but it contains neurotoxins and must be carefully cooked in order to eat it. I was told that kovansieni must be cooked twice, in a lot of water, to make it safe to eat and that many people choose to cook it outside because even the vapors can be harmful and cause headaches.  Why hunt the korvasieni?  Because it's delicious (and Tuula and Leo know what they're doing)! 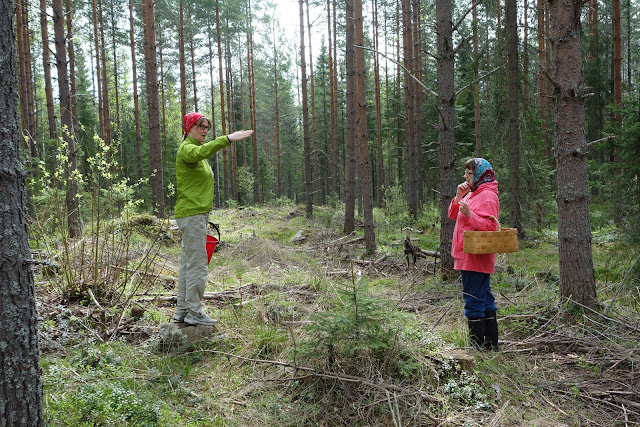 This area is where Tuula used to hunt mushrooms with her mother when she was a child, and Tuula brought her children here when they were young.  She knows this area well and knows about its ability to produce mushrooms, blueberries, lingonberries, and strawberries.  Christine is also quite skilled in the hunting of mushrooms.  They heard that the best time to find the korvasieni is when the new leaves on the birch trees are about the size of a stamp and the leaves are about that size right now. 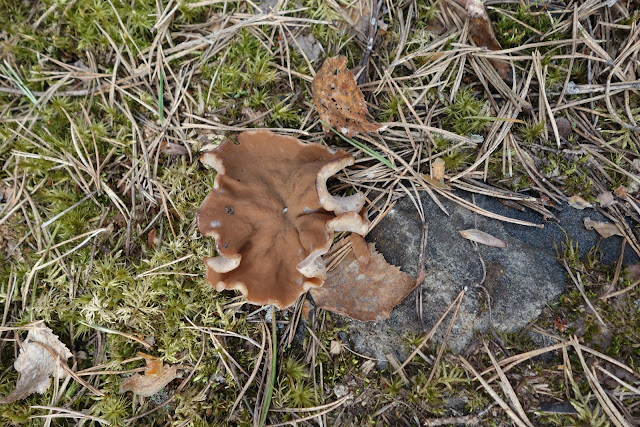 These mushrooms are close to what we are hunting but the "ear mushrooms" are more crinkled and actually look like the shape of a human ear. 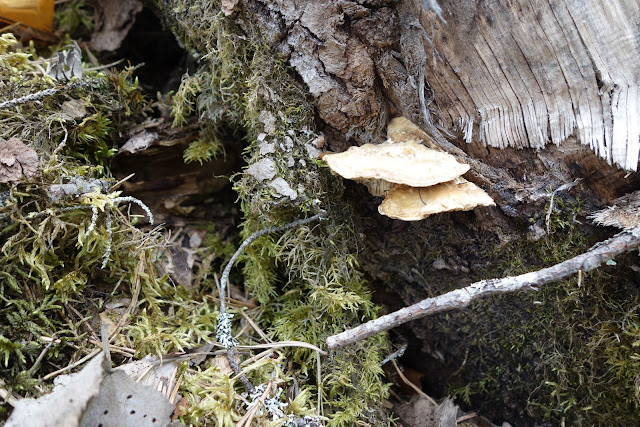 These aren't the right ones, either. 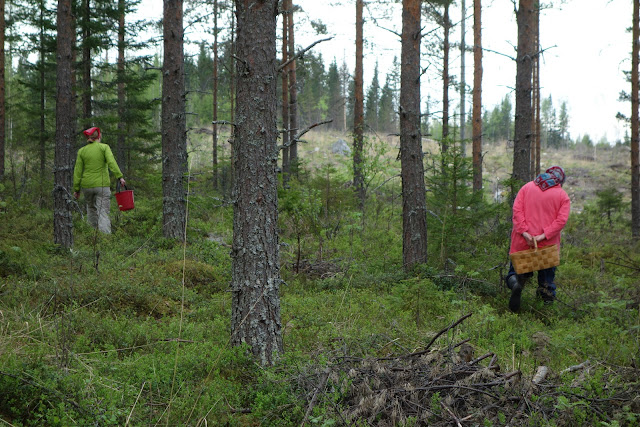 So we continue to hunt.

Leo likes to go quickly through the forest and so the three of us went one way and Leo went another - along with his compass and phone. 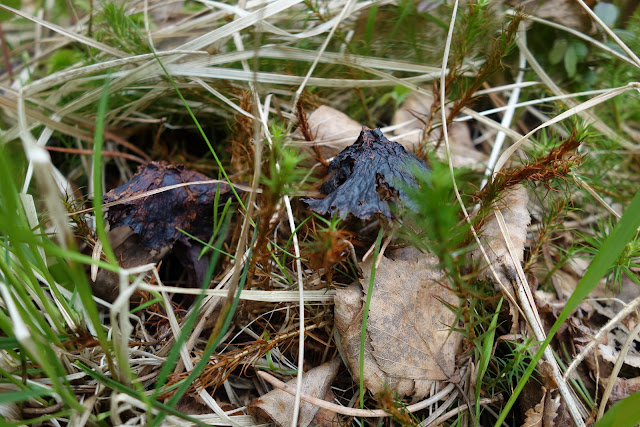 I have to ask about every mushroom I find because I don't know what I'm looking for.  Tuula told me these mushrooms are old and from last year. 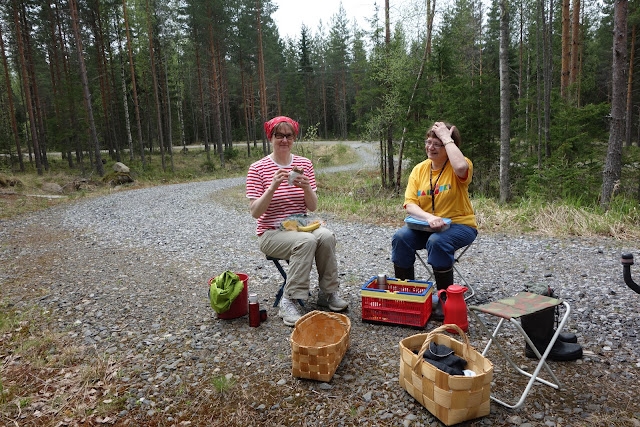 We didn't find anything, so we did what all good Finns do - we had coffee.  The Finns are very good at stopping what they're doing several times a day to sit and have coffee.  (I absolutely love this tradition.) 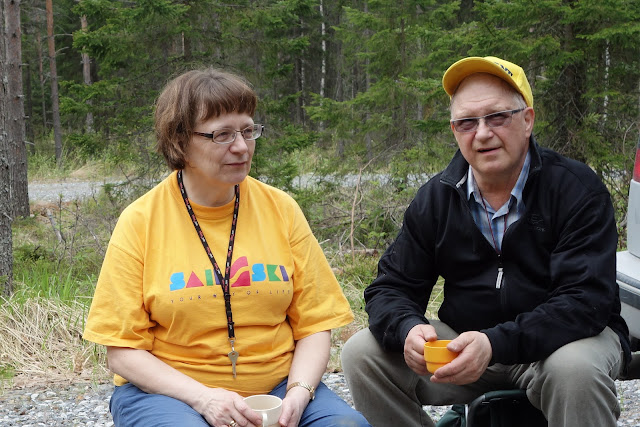 Leo returned and said he had found three mushrooms. 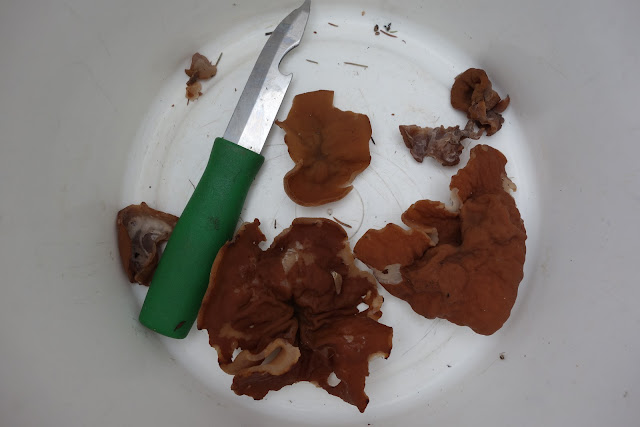 The one in the upper right is the poisonous mushroom we are searching for. 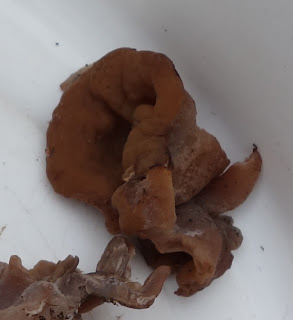 The other mushrooms look similar to the ones we found at the beginning of the hunt. 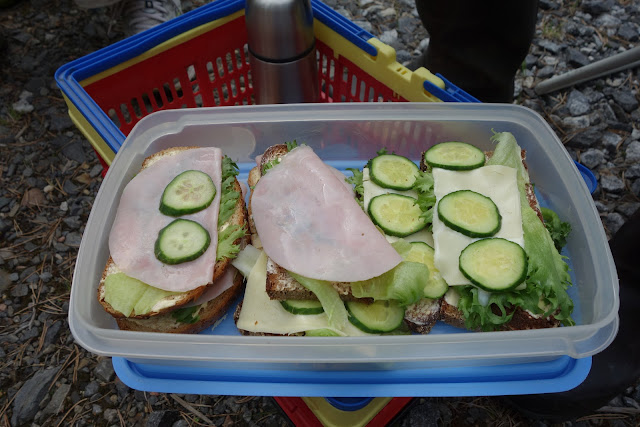 After coffee, Tuula served us a traditional Finnish lunch.  Very delicious, I must say. 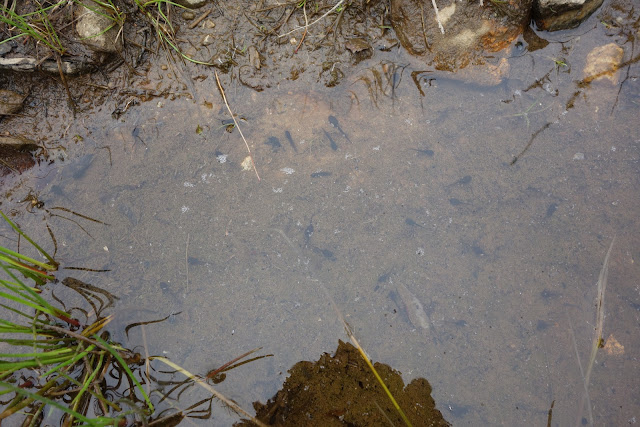 We drove to a second location, all the while scratching our heads and trying to determine why we couldn't find any special mushrooms. Here are some tadpoles Christine found in a pool of water by the parking lot. 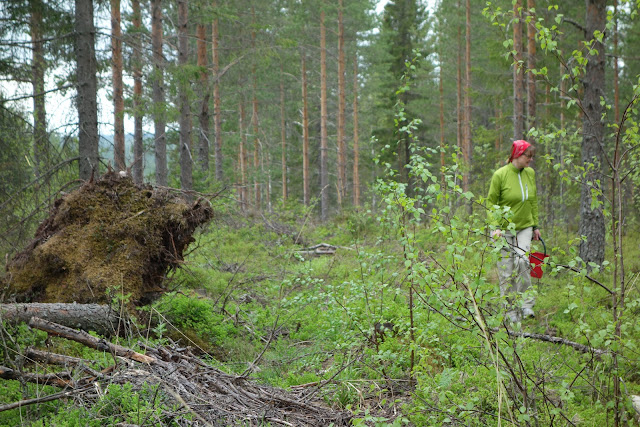 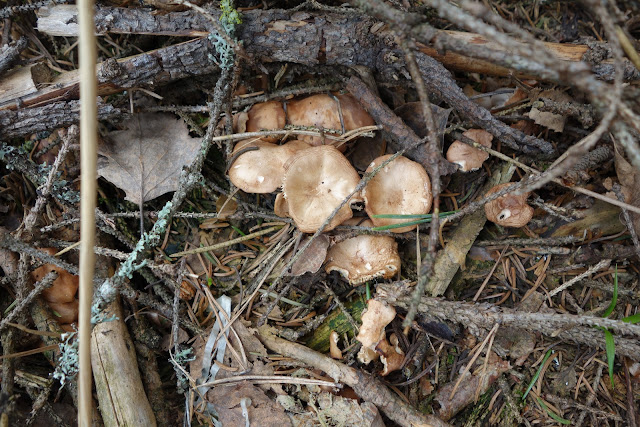 These aren't the correct mushrooms, 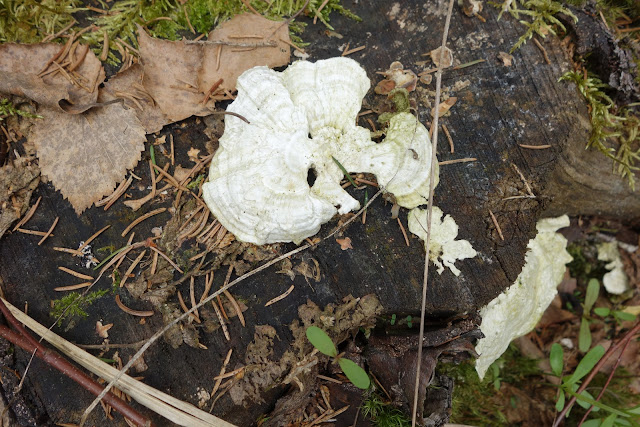 and neither are these, 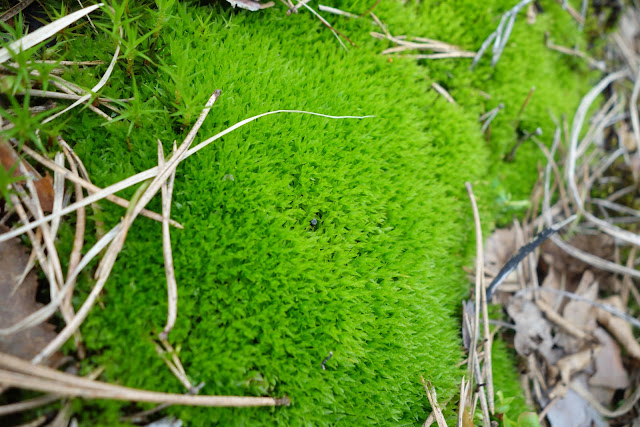 but this was so pretty I had to take a picture. 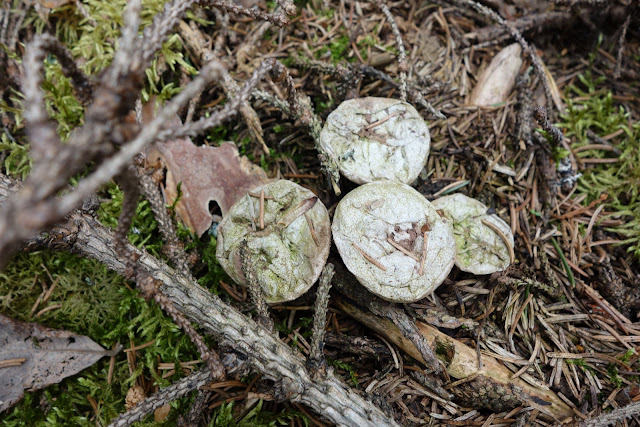 These aren't the right ones, either, and they're actually left over from last year.  Tuula said they're the type of mushroom that sprays its spores "like smoke" if kicked. 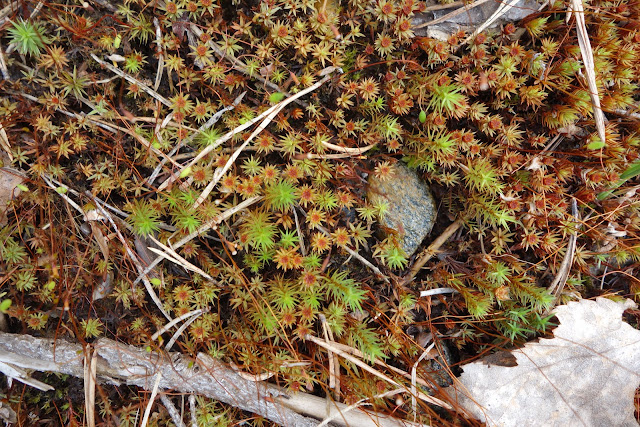 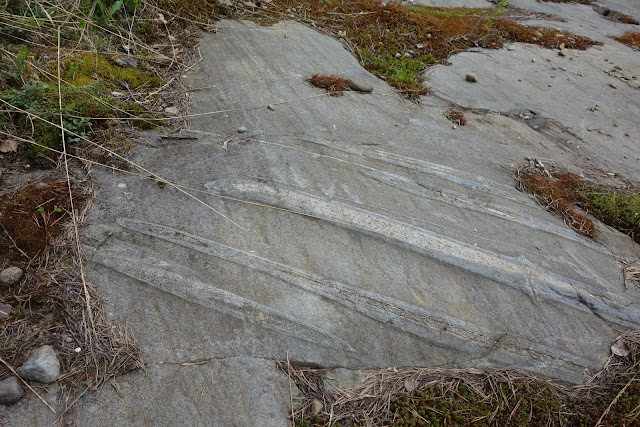 Evidence of the last glacial period. 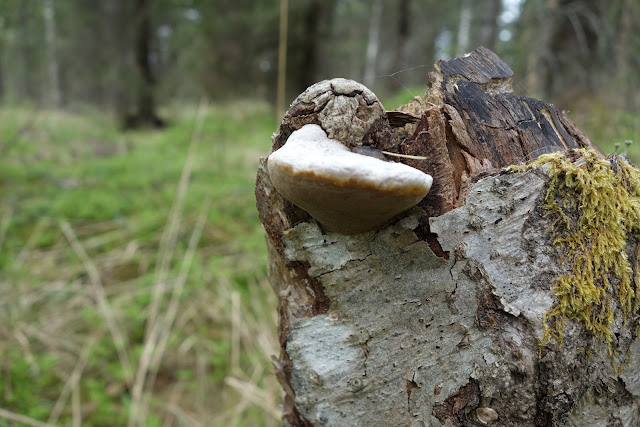 This isn't the right type of mushroom, either. 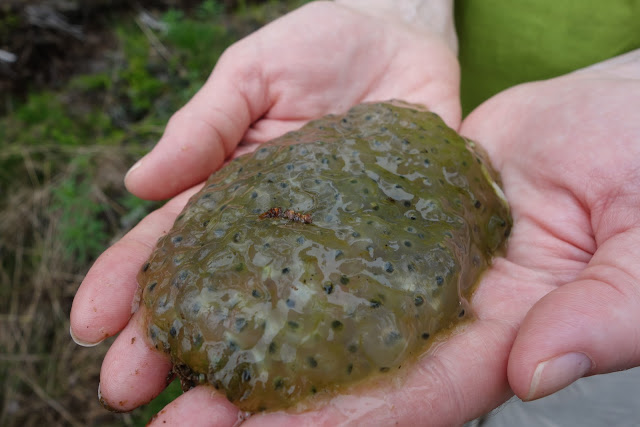 We found some frog eggs in the tracks of some heavy logging equipment.  These eggs had apparently been laid when there was still water in the tracks but the water had evaporated and left the eggs intact.  It's possible the embryos are dead. 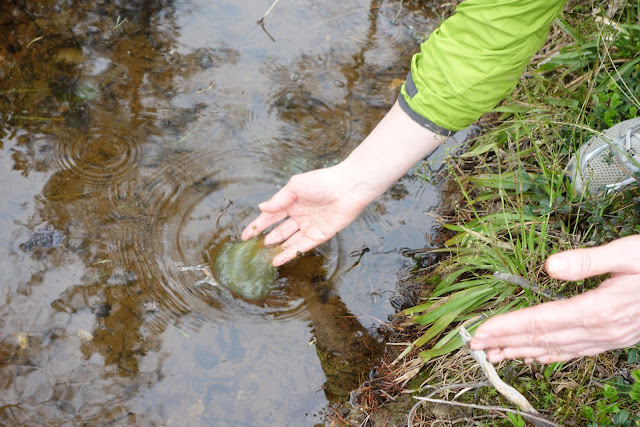 If there is a chance they are alive, their only chance of survival is if they're back in the water. 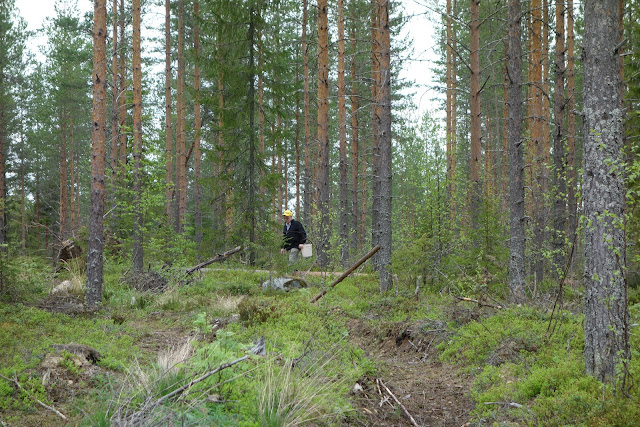 We didn't find any of the elusive poisonous mushrooms and usually in this area there are plenty.  Leo returned with just a few more mushrooms in his bucket. 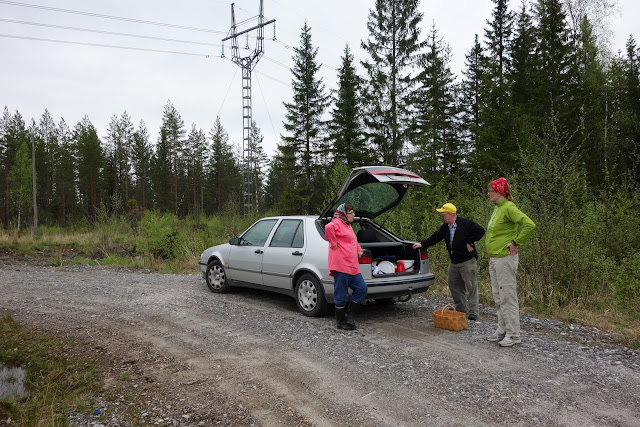 We returned to the car and had coffee.

Perhaps it's a little early to be hunting these mushrooms; we'll try again next weekend.